100 years ago Heart of the Shires was called Home Farm. It was the working farm of the Brodie Family, who had purchased the site in the early 1900’s. 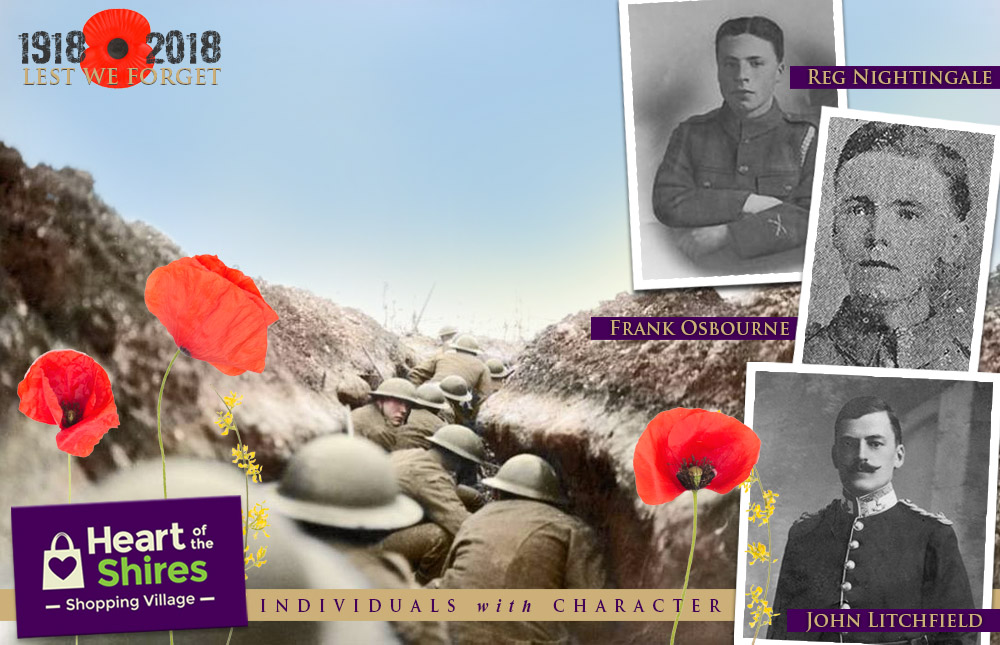 100 years ago this Sunday marks the end of The Great War – the war to end all wars. Just like many households, the Brodie family were involved with Joseph Brodie, who was 20 at the outbreak of the war, and a farm labourer in the family business, being available for duty. In a conflict that was so devastating to so many, the Brodies were lucky with Joseph surviving the war but others, based very near to the site of Heart of the Shires, were not so lucky with over 100 men who lived within just a few miles being killed in action.
As the nation marks the end of hostilities this Sunday we remember just ten of the many, who were lost, and tell their stories.
1 Benjamin Ariss
Private 2nd Battalion Tank Corps. No. 111631
Died of wounds 22nd March 1918 aged 21 France/Flanders
A farmer’s son and son of Amos and Emma Jane Ariss, Norton.
2 John Litchfield (Pictured)
2nd Lt. Bedfordshire Regiment, 3rd Battalion, attn 1st battalion. Died 20th October 1914 at La Bassee, France, aged 32. John lived in Muscat and was a School Teacher. John was born in Norton in 1882 to Elizabeth and William Allin Litchfield.
3 Harry Penn
Private Royal Warwickshire Regiment. 2nd/8th Battalion No 24671
Died 17th February 1918 aged 25
Son of George and Susan Penn of Norton. Harry was a Farm Labourer.
Harry Penn died in Norton in 1918 as a result of war related sickness. Harry was gassed on December 19th, 2017 and diagnosed with gas poisoning and T.B.
4 Stanley Arthur Smith
Company Sergeant Major 19915 “D” Company 4th Battalion Rifle Brigade. Killed in action Salonika. 15th April 1918. Aged 32 and the son of William and Fanny Smith of Staverton Road, Daventry. Born and resident of Daventry. Enlisted Warwick. No known grave. Commemorated on DOIRAN MEMORIAL Greece. (William and Fanny Smith lost two sons, Edgar and Stanley).
5 Frederick Reed
Acting Corporal 4495
13th Battalion the Durham Light Infantry
Died of Illness 22nd December 1917, aged 34.
Buried in Giver British Cemetery, near Montebelluna, Italy. Frederick was from Weedon.
6 George Liddington
Rifleman 2022 4th Battalion Rifle Brigade. Killed in action France and Flanders 15th March 1915, Aged 26. Son of Mrs L Johnson of 19 Norton Road, Daventry. Born, Resident and enlisted at Daventry. No known grave. Commemorated on YPRES (MENIN GATE) MEMORIAL Panel 46-48 and 50.
7 William Frank Osbourne (Pictured)
Lance Corporal 201535
1st/4th Battalion (Territorial Force) The Wiltshire Regiment. Died of illness 18th September, 1917 aged 24 from Weedon.
Buried in Cape Town. Maitland Cemetery, South Africa
8 Harry Thomas Goodwin
Rifleman 7921 1st/12th Battalion London Regiment. (The Rangers). Killed in action Flanders 9th September 1916. Aged 21 Son of Henry Thomas and Mary Ann Goodwin of 68 Warwick Street Daventry. Born and Resident of Daventry Enlisted Coventry. No known grave. Commemorated on THIEPVAL MEMORIAL Somme Pier & Face 9C.
9 George Clark
Machine Gun Corps. No 178026
Died 29th October 1918 (at home) aged 30. George lived in Weedon and was a boot maker.
10 Reginald Frederick Nightingale (Pictured)
Private 56836
18th (Service) Battalion, The Lancashire Fusiliers
Killed in action 31st October, 1918. He was just 19.
Reg lived in Weedon and is buried in Fichte Military Cemetery, Kortrijk, Belgium.
11 days later the war was over.
They shall grow not old, as we that are left grow old:
Age shall not weary them, nor the years condemn.
At the going down of the sun and in the morning
We will remember them.

“My friends and I regularly visit to buy that little something special or unusual. Everything is of lovely quality but there is also bargains to be had. Lunch at the on site tearooms is also a must. A lovely way to spend an afternoon.” Julie Hemmings (via Facebook)